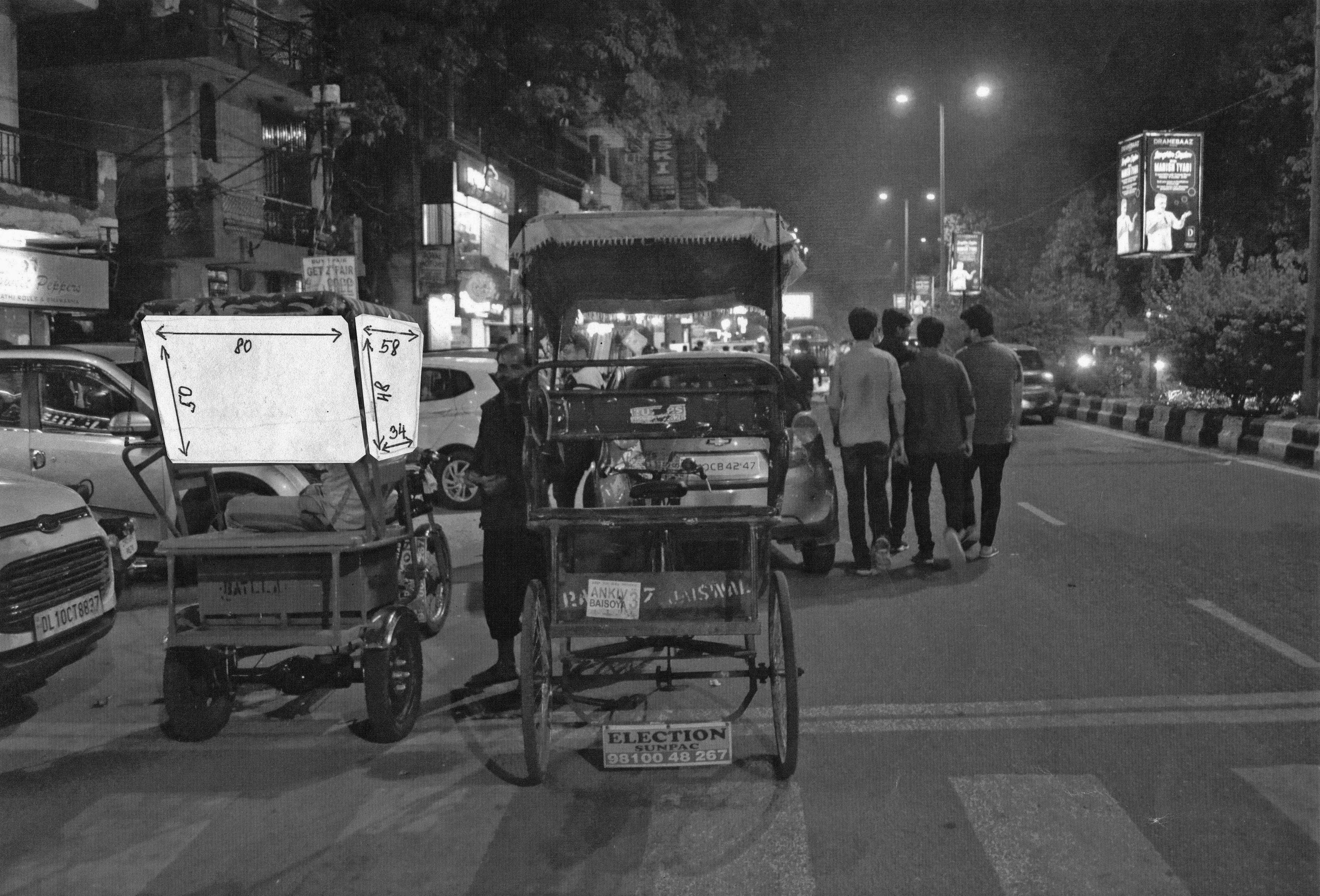 Throughout the day, the multiple voices calling, “metro, metro?” can be heard from the places where the cyclo -rickshaw drivers compete for potential customers to ride in their carts. The drivers, who mostly come to Delhi from poor neighboring states to support their families during of the agricultural off-season, often earn so little that they cannot afford even the cheapest accommodations, so they sleep in the streets on the seats of their carriages. Instead of promoting the most environmentally friendly form of transportation in one of the most polluted cities in the world, the city council administers a restrictive licensing policy, pushing many cyclo-rickshaw drivers to the margins of legality.

A gallery for text and visual art installed on cyclo-rickshaws, this project not only explores the possibilities of mobile art installations in the public space of one of the world’s most populous cities, but also recognizes the value of rickshaw drivers’ labor. Importantly, it also provides each driver with a small financial reward for each exhibit.

The gallery takes the form of one large rectangular banner (50×80 cm) and two smaller trapezoidal banners (50x58x48x34 cm) directly mounted on the carriage (see sketch). It is possible to use any one, two or all three banners on a single rickshaw. The exhibit can also be designed for any number of carts. Cyclo-rickshaws generally take their fares over short distances, so that an individual rickshaw operates within a limited territory. Therefore, it is advisable to design each project for a specific area of ​​Delhi (from rich neighborhoods to slums) after a consultation with the curator and local members of the team. In the case of textual work, the text should be bilingual, in English (or any other language if there is good reason) and in Hindi, because many inhabitants of Delhi do not speak English. Translation into Hindi will be provided by the local team members of the gallery.

The gallery would like to offer a small financial reward to rickshaw drivers for carrying the exhibits throughout the city, roughly at the level of their lowest daily earnings. The average earnings for a driver is about 100-300 rupees a day, or 36-108 Czech crowns. Each exhibiting artist pays the driver 100 rupees for each day of the exhibit. Depending on the scale of the project, is is possible to hire any number of carriages. Art projects related to the rickshaw drivers which cannot take the form of banners, but are nonetheless appropriate for Delhi, are also welcome for consideration to be exhibited as part of the project Ukradená Galerie in Delhi.